The Walking Dead – “No Way Out” Review and Analysis

Do I enjoy TWD? Yes. But do I love TWD? To be honest, no. The show has its ups and downs, and when it’s good, it can be really good, but most of the time, it lulls into a status quo that can be exhilarating in parts, but usually marches forward at a measured pace towards an unclear endgame.

My main problem with TWD? It’s low stakes TV trying hard to convince us that it’s high stakes TV. I know many people don’t have this issue with the show, and it does have quite a high body count, but it rarely kills off anyone of any import.

The show strung us along for weeks before they showed Glenn crawling under a dumpster to escape a zombie hoard. Did that feel cheap to you? Because it felt cheap to me. That’s what I mean about low stakes TV. Glenn has plot armor, and this mid-season premier makes that abundantly clear.

Let’s get into it.

Yup, People Died. But No One You Care About, So Relax

When Alexandria was overrun by walkers, it looked dire for our heroes. And indeed it was. The Blonde Lady That Rick Likes and her two insufferable twat waffle children became zombie food when the Young Twat Waffle freaked out and brought his death upon himself. The Blonde Lady That Rick Likes wasn’t far behind when she then freaked out and got eaten. Then the Older Twat Waffle, blaming everything on Rick, tried to shoot him, but not before Michonne ran him through with her sword – LIKE A BOSS.

HOWEVER, the Older Twat Waffle did get a shot off and fucking put a bullet on Coral’s fucking eye. Alright, that upped the ante a little bit, but let me take some air out of your sails. I kinda knew that Coral lost an eye (and lived) in the comic books, so I never did think he was in any danger of dying. But Coral got his fucking eye shot out, and I have to admit, I enjoyed that bit.

And now a public plea: dear TV show runners/writers…if you are unable to write children that aren’t horrible, insufferable, oxygen-sucking angst babies, then just don’t write them at all.

The other death was Wolf Boy. And I was honestly more moved by Wolf Boy’s death than that of the Blonde Lady That Rick Likes and her Twat Waffle children. Wolf Boy was a villain, but he tried, twice, to save Doctor Lady’s life and was strangely selfless in those moments, even as he abducted her. And what was he going to do with her? Make her like him? I don’t know. The whole Wolves story line is a bit nonsensical.

So, those are your “friendly” (Wolf Boy defies easy classification) casualties from this premiere and they are all…meh. If I can’t be bothered to learn your name, you do not matter very much in the grand scheme of things. All tea, no shade, but that’s the precedent this show sets. Red shirts, and there are a shit ton of them, die too often to hold much emotional weight.

I was honestly convinced they were going to kill Glenn when he was drawing walkers away from Maggie and he was backed up against a fence, completely surrounded and running out of bullets. My blood started pumping. I got unreasonably excited. Did they fake us out earlier in the season just to kill him off now? Holy crap, this show DOES have balls!

Aaaaaand, nope. Abraham and Sasha save the day by raining bullets down on the walkers and somehow don’t hit Glenn in the process? And the plot armor gets thicker. Glenn is immortal.

In addition to the Alexandria kerfuffle, we’re introduced to the name of the next Big Bad when Daryl, Abraham, and Sasha run into Negan’s little motorcycle gang. Everything now belongs to Negan or something or other…I don’t know. Exposition, exposition, explosion. Daryl saves the day by blowing the motorcycle gang up with a rocket launcher. Yup, that was pretty great, but basically everything Daryl does is great.

So if Negan is now the Big Bad, what the fuck was the point of the Wolves that we were introduced in the first half of the season? Are they working with Keegan? Were they just to keep us distracted as a minor human threat while Rick et al set up camp in Alexandria? What’s was the point of those guys? Sigh.

Huh, Walkers Like To Walk Into Fire – HOW DID WE NOT KNOW THIS?!

So, did you guys know that walkers are attracted to and will walk into fire and kill themselves? Because I feel like that was a BIG PERTINENT FACT THAT COULD HAVE SAVED EVERYONE A WHOLE FUCKING LOT OF TROUBLE!

Really, TWD?! REALLY? Alexandria is saved by setting a lake on fire and having the walkers stroll into it?

Is this new information? If it is, then how did Daryl know it would work? This makes no fucking sense. Wouldn’t it have been easier to set the zombie horde on fire when they had it contained in the quarry? I don’t understand. Either they knew are were like “fuck it, let’s do everything the hard way,” or they didn’t know and Daryl setting the lake on fire was inexplicable.

By the end of the episode, we had our two “moral of the story” moments, one from Why Isn’t He Dead Yet Priest Guy and Rick – everyone can work together and not completely suck! It’s all frankly a bit campy, especially the shot at the end with everyone swinging their weapons over and over again to show they’re all working together to survive, even the shitty Alexandria residents that were considered by Rick and company to be weak and not prepared for what’s outside the walls.

And Why Isn’t He Dead Yet Priest Guy – ugh with this dude already. I clearly see we’re in the middle of a redemption arc for him, but I’m over it. In a show were the weak are usually red shirted pretty quickly, this guy has stuck around for too long. I’m sure he’ll get a hero’s death and it will be perfectly telegraphed and perfectly boring.

Why Am I Such A Hater?

I’m not trying to be. There was a lot to like about this episode, but the emotional beats and obvious red-shirting of Blonde Lady That Rick Likes and her family made the episode fall a bit flat. Not to mention the whole lake of fire bit, the most frustrating and nonsensical plot point that feels a lot like dues ex machina in order to kill off the invading walkers.

The other thing that bugs me overall about the show is I can’t envision an end game. Obviously we’re in a very long Act 2, but is there ever going to be an Act 3, where the story concludes for our heroes? In many ways, the title of this episode, “No Way Out,” feels a bit prophetic. As long as TWD keeps earning fantastic ratings for AMC, who isn’t dumb and will milk this cow for as long as it can, there won’t be an Act 3 for a long time, and the show will get trapped in story-telling limbo, unable to meaningfully move forward.

The best shows are written with a conclusion in sight, otherwise they become stagnant while wallowing in their second acts. Quality tends to wane as plots are repeated and fans lose interest in seeing the same story told in different ways. A perfect example is The Good Wife. It’s lost it’s way a bit after being one of the best shows on network TV and its most ardent fans and critics will tell you it needs to end. And it is – CBS announced that this is its final season.

TWD remains a perfectly enjoyable genre show and has garnered a ton of fans who will undoubted eat up what the show has to offer (see what I did there?). But is it the best that TV has to offer? Taking a gaze across the landscape, where Game of Thrones, The Leftovers, Better Call Saul, The 100, Hannibal (RIP), and many other high-quality, high-stakes shows exist, the answer is no. 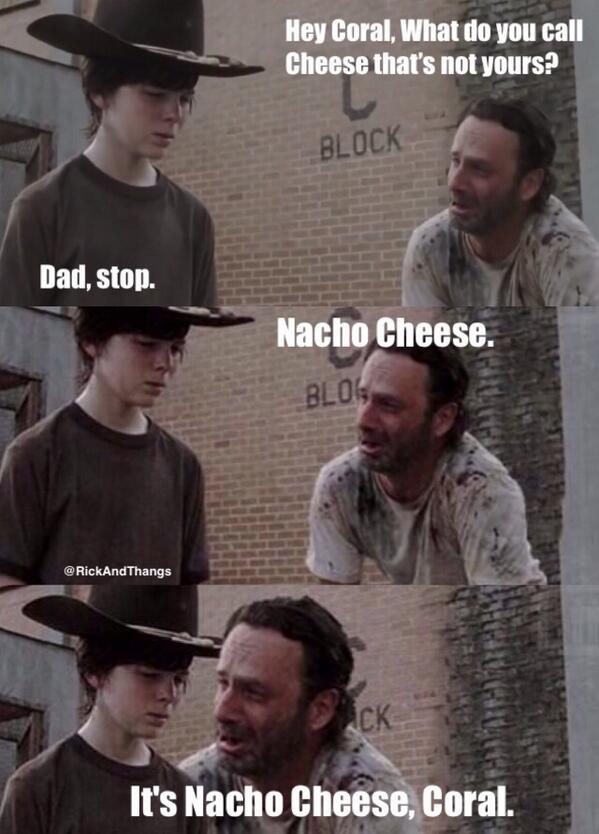