Worth a Watch: The Magicians

The Magicians is an original series airing on Syfy, based on books bearing the same title. The premise is very familiar one if you’re a Harry Potter fan: magic exists is our world and a few gifted individuals are able to wield it.

Quentin – he is accepted into Breakbills University, a hidden school that teaches magic. He’s a bit of an unsteady character right now, emo and conflicted and uncertain of his abilities. He tends to suffer from depression and anxiety. As a main character, he’s one of the least interesting people on the show at this moment, but I’m going to give him some time to develop. Quentin falls in with a group of students that eventually start practicing some questionable spells on their own in an attempt to bring back the brother of one of these students. What they do summon is not pleasant.

Julia – Julia is not accepted into Breakbills after failing the entrance exam. And when prospects fail the exam, their memory of Breakbills and magic is wiped, and they are sent back to the real world to be, well, like the rest of us. Mundane. Except Julia doesn’t forget that magic exists and her desire to find Breakbills again becomes an obsession that drives her into a deep depression. When she’s at her lowest point, she’s accosted by a stranger named Pete, who is a hedge witch – part of a group of people who practice magic on their own – and she’s taken to them to participate in their own little magical entrance exam.

I like the juxtaposition of the official school of magic and the back alley hedge witches who accept Julia as one of their own and begin to teach her. Julia passes her “entrance exam” with these witches by doing a little magic, but relies more on smarts and resourcefulness to work her way out of the situation they thrust her into. I’m much more interested in the hedge witches than the University, although there are some very fun supporting characters at Breakbills that likely figure very prominently into the story moving forward.

What isn’t entirely clear from the first 3 episodes is what conflict will arise between these two schools of magic – book smarts versus street smarts. It’s obvious that the Breakbills students look down on the hedge witches, and the hedge witches are working some backdoor game to set something afoot at the University, but we’re just at the cusp of that story line.

Quentin and Julia’s relationship as best friends will likely be tested by their different alliances. They grew up obsessed with magic, convincing themselves that it could be real. When they find it is actually real, Julia is engrossed with learning what she can do…she lives and breathes magic, but questions Quentin’s commitment. Quentin is angry at her because he suspects that she knows he’s always had a thing for her and she’s carrying a resentment that he didn’t help her get into Breakbills. He takes it one step further an tells her that she’s just angry he got into Breakbills and she wasn’t good enough to get in.

Whelp, that was harsh.

A story line that runs as an undercurrent at the moment is a Narnia-esque fictional realm called Fillory from Quentin’s favorite book series. Fillory seems to really exist, or at least in Quentin’s mind it does. It’s such an interesting and meta concept and I’m hoping it becomes a rich feature of the show.

Why am I recommending a watch?

Well, the show is promising. Amid tons of scifi and fantasy and comic book genre TV, The Magicians feels like it could stand apart if he continues to ramp up the stakes, which are fairly low right now while they’re in the world-building phase of the show.

The way magic is conjured is quite interesting, employing intricate hand gestures instead of a wand or just one’s thoughts or force of will. The premiere didn’t grab me until the very end, when the summoning spell gone awry manifests The Beast, one of the creepiest things I’ve seen on TV in a long time. He has the body of a man, but his face is obscured by a swarm of moths, and he’s able to slow down time and walk among the students. 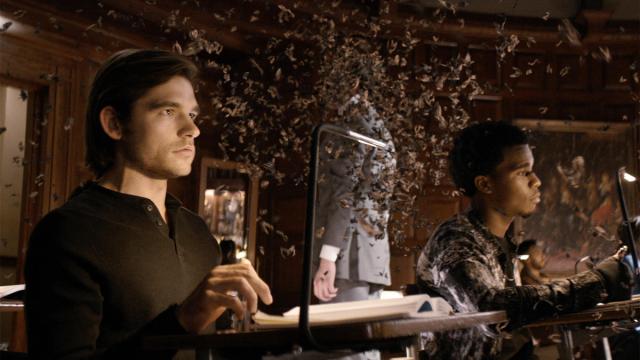 The Beast. Much creepier in action than in a static photo.

The visual of the beast reminded me a bit of the ascetic sensibilities of one of my favorite shows, Hannibal. It was a great end to a pretty watchable premiere. I find the show really picks up with Julia’s story and I’m starting to wonder if The Magicians is really her tale rather than Quentin’s. I would not be disappointed in the least if she is secretly the main character.

This entry was posted in Television, Worth a Watch and tagged The Magicians. Bookmark the permalink.